Theological Triage . . . Is That Your Final Answer? 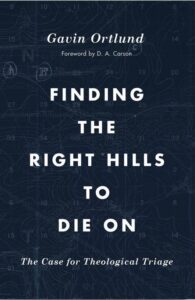 Recently I read the short book, Finding the Right Hills to Die On by Gavin Ortlund (Crossway, 2020). It’s a Gospel Coalition book with a forward by D. A. Carson. Book endorsements include Southern Baptists Russ Moore, J. D. Greear and Daniel Akin plus Bryan Chapell, a Presbyterian, and Sam Storms, a Charismatic Calvinist. With such a wide theological range of recommendations, these names give the idea that conservative evangelicals of many varieties will find this book useful. Indeed, most of the book, perhaps 75–80% is very good and few conservatives would be hard pressed to be dismissive of the author’s views. Of the remaining portion, there will be much discussion.

Ortlund combines two metaphors popularized in early 21st century evangelicalism to title his book. The first, theological triage, initially used by R. Albert Mohler in 2005, describes a way of thinking about theological discourse that recognizes that while everything taught in the Bible is important, not everything is equally important. Take the doctrine of the Trinity and the doctrine of last things. Someone can be wrong about the timing of the Second Coming and still be a genuine believer, but if someone denies the trinitarian nature of God, their eternal destiny is in question. Belief in certain points on the person and work of Christ are Gospel-critical, while beliefs regarding the end times are of less important, even if both doctrines can be argued to be biblical.

During one season of my life, I worked as an Emergency Medical Technician (EMT) and learned the importance of triage. Triage, from a French word trier meaning “to sort or select,” was introduced in 1792 by Baron Dominique Jean Larrey, the Surgeon in Chief of Napoleon’s Imperial Guard who developed a system to organize mass casualty emergency management in time of war. In modern emergency medicine, there are four levels of medical triage—level one – immediate treatment needed, the situation is life threatening (e.g. cardiac arrest, a sucking chest wound); level two – urgent, but not immediately life threatening; level three – less urgent but still important; level four – nonlife threatening (e.g. a broken arm or leg). Triage sorts those who are likely to live if immediate care is given, from those who are unlikely to live, no matter the level of immediate care given, and those who will live if no immediate care is given at all. For the first responders on the scene of a mass casualty, right triage choices will make significant determinations on the numbers of fatalities vs. survivors.

The second metaphor at play is a military one—a hill worth dying on. This calls to mind significant military battles such as the fight for Hill 255 (Pork Chop Hill) during the Korean War in April and July 1953. The hill was deemed to be valuable enough to expend significant military casualties on both sides to hold this strategic outpost. Not every hill in Korea had this kind of value. Some hills were just not worth dying for.

Both of these metaphors are used together to stress the kinds of doctrines that are really essential to the faith and those that are important but not Gospel-critical (e.g. credobaptism vs. paedobaptism) and those that are tertiary. Most conservative evangelicals are united in their view on the importance of the first-tier doctrines. These are essential to orthodoxy. From here, things begin to weaken. Just how important is baptism? As one moves down the list of theological issues, what about complementarianism vs. egalitarianism? What about views on creation—young earth, old earth, even theistic evolution or day age? How should we view eschatology or cessationism vs. continuationism? How significant are these doctrines for Christianity?

The section of Ortlund’s book that many conservatives will debate is the discussion of secondary vs. tertiary issues. Secondary issues are “urgent for the church” while tertiary issues (called third rank in Ortlund’s book) are “not essential to the Gospel or necessarily urgent for the church” (Ortlund, 47). For Ortlund, one’s view of the millennium and or of creation are third rank doctrines. The church shouldn’t divide over these. Ortlund places cessationism vs. continuationism between second and third tier. Complementarianism vs. egalitarianism is also a second-tier doctrine for Ortlund, although Beth Moore has recently argued that it has become a first-tier issue in the Southern Baptist world. Beth rightly sees the gender issue as being connected to inerrancy but wrongly calls this a first-tier issue.

So, who gets to decide what is a Gospel-critical, a secondary, and a third-tier issue? Evangelicals are widely agreed on the first level doctrines and their importance. They are generally agreed on second level truths, but widely disagree on these third level issues. So, who gets to decide what is and what isn’t tertiary? It seems to me, that tertiary issues are in the mind of the beholder. For many, how can revelatory gifts be considered tertiary? Either God gives a word of prophecy or he doesn’t. Can a genuine Christian simply ignore a revelation from God if it is such? One’s view of creation necessarily affects one’s view of Adam and the entrance of sin into the world. How are these tertiary issues? Even if eschatology is truly tertiary, can a church be expected to teach both or simply to teach nothing on eschatology for fear of offending someone? What does the teaching pastor do with the book of Revelation? Ignore it?

What is the significance of a tertiary issue in terms of fellowship? How can a local church possibly allow diversity on the issue of creation? What would we think if the pastor announced that “July is creation month.” “On the first Sunday, the young earth people have the service. On the second Sunday, we hear from the old earth people. We leave the third Sunday for those who hold to theistic evolution, and the last Sunday will be for the few holdouts that still affirm day-age.” The church would be filled with confusion! We live in the day of multiple services to accommodate musical preferences. Why not have an early service next week for the cessationists and a later service for the continuationists, complete with tongues, healing and prophesying, by both men and women, since women can get the gifts too. Seems to me that the only way that cessationists and continuationists can get along inside church is if one side or the other doesn’t hold their view very tightly.

The Evangelical Theological Society treats the cessationist/continuationist issue as tertiary. So, Sam Storms, the 2017 president of ETS, used his platform delivering the annual address to make an impassioned appeal to accept his view of things. Therefore, it apparently isn’t tertiary with him. All of ETS should embrace his view, otherwise what was the point of the address? I just wonder how ETS would have reacted if a Baptist got up to deliver an address on credobaptism? Certainly, Storms was within his right to deliver the address he wished to deliver but to what end?

What is the ultimate point of theological triage? Is the only thing that can separate one professing believer from another a Gospel-critical issue? John Piper many years ago tried to introduce alternative baptismal forms for church membership at Bethlehem while retaining credobaptism for leadership. The elders at Bethlehem ultimately withdrew the proposal. Why was it withdrawn? Churches will of necessity have narrower boundaries than simply first tier issues. A church’s view on baptism will necessarily set the theological direction. In the same way, its view on cessationism (pro or con), egalitarianism (pro or con), young earth (pro or con), and even eschatology (pre, a, or post mill), despite the contentions of Mark Dever to the contrary, provide boundaries for the church for the sake of harmony and genuine fellowship.

At the end of the day, discussions on theological triage are excellent for consideration of broad Christian fellowship. I can drink coffee with and pray with a brother who maybe an amill, egalitarian, old-earth, continuationist. But I do not see how we can do church together. We need something more than simple theological triage to understand how Christian doctrine functions within the context of a local church. Some things, no doubt are truly incidental. I once received an anonymous letter claiming that Judas was a believer. Apparently, Pope Francis is inclined to think this too. Whether he was or wasn’t is a matter of small consequence today (except for Judas). Belief one way or the other need not trouble the church. But young earth or one’s view of the end times? These are matters that may not divide us from one another in heaven, but they will likely separate us to some extent while on earth. Is this a bad thing? As long as we are charitable to others with whom we disagree over these so-called tertiary issues, I don’t see why we each cannot follow Christ according to the understanding we have of his Word. Baptists used to call this soul liberty. Here I stand, I can do no other, theological triage notwithstanding.