Why the Reformation Still Matters

As a church historian, it has been my blessing to plumb the depths and breadth of the magnificent story of Christianity from the time of Christ to the modern era. Our history is a story of highs and lows, of successes and failures, of glories and sorrows. Polycarp (69­–155), disciple of John and Bishop of Smyrna, was that great saint who refused to deny his Lord to escape the persecutor’s fire. Sadly, our history is also filled with error. Churches and their leaders have misunderstood or misrepresented the Scripture and led those who come to them into error. Arius (ca. 250–336) is an exemplar here.

Today, Christianity is filled with many who do not follow the Word of God. In 1517, the predominant church in the West, centered in Rome, was shaken to its core by the Protestant Reformation. For more than one hundred years, men like Martin Luther, Ulrich Zwingli, John Calvin, and John Knox, although birthed and educated in the Roman system, threw off their former religion and embraced sola Scriptura, sola fides, sola gratis, sola Christus. In turn, they exposed Roman Catholicism for what it was, a false religion led by false prophets.

Not much has changed in the last five hundred years in the Church of Rome. It has become larger, stronger, and more theologically erroneous. Today, many Protestants, especially evangelicals, have never darkened the door of a Catholic church, unless it has been for an occasional funeral. However, as a historian of Christianity, it has been my burden to understand the history of professing Christianity with all its warts and virtues. This includes Roman Catholicism. I have made it a regular practice to visit Roman Catholic churches wherever I have lived and traveled. Consequently, I visited some of the most impressive and important RC churches in the world, including the four papal basilicas in Rome—Archbasilica of St. John in the Lateran, where the pope’s chair is located, St. Peter’s Basilica, Basilica of St. Paul Outside the Walls, Basilica of St. Mary Major. Add to these, RC churches in France, in Paris (Notre Dame, recently burned, the Basilica of the Sacred Heart on Montmarte and the Basilica de St. Denis, which houses the bodies of the French monarchs) and in Strasburg, the Cathédrale Notre Dame; in Spain, Sevilla’s Catedral de Santa María de la Sede, the largest Gothic cathedral in the world and Toledo’s Catedral Primada Santa María, considered the world’s finest Gothic cathedral plus many others; churches too numerous to list in Portugal, Romania, Hungary, Austria, Germany, Switzerland, Kenya, England, China, and of course, in the United States and Canada. In addition of visiting churches, I have also visited sacred grottos, shrines, holy places, monasteries and nunneries, etc. I have witnessed the Mass in multiple churches and observed Holy Week, Semana Santa, the nightly processionals leading up to Easter during a visit to Spain and Portugal. I have seen Roman Catholicism up close and personal. I have read its literature, observed its practices and seen its edifices. I have a pretty good idea of what Roman Catholicism is, what it teaches, and what it does. 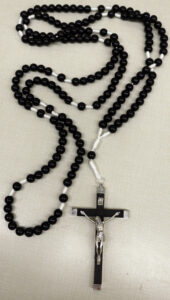 It therefore came as no surprise earlier this week to learn that starting Saturday, May 1, Pope Francis is encouraging Catholics throughout the world to pray the rosary for the month of May to end COVID-19. Now who could object to people praying for the end of the pandemic? Seems like prayer couldn’t hurt, could it? But before we get excited and celebrate this religious activity, we need to understand a bit about it. It’s not simple prayer that Francis is encouraging, it’s the rosary—a string of beads purposed to keep the one praying on track through a series of prescribed repetitious utterances that, in part, magnify Mary and confuse her role in Christianity. It is true that the rosary also includes the Apostle’s Creed and the Lord’s Prayer, but the predominant feature of the rosary is the Hail Marys—ten repetitions in between one recitation of the Lord’s Prayer, called a decade. The cycle is repeated five times as there are five decades in the rosary. So, when a person prays the rosary, the major utterances are the Hail Marys.

Why is this such a problem for Protestants and why this should cause us concern? First, the rosary, by its very design, seems to contradict the biblical warning against “vain repetitions.” In Matthew 6:7, Jesus warned his followers against uttering “empty phrases” (ESV) or “vain repetitions” (KJV), “like the Gentiles do.” Why do they utter these empty words? “Because they think they will be heard for their many words.” At a minimum, the rosary is a series of empty words that are spoken with no real purpose. Here is an example of the repetitious utterances, seemingly spoken without feeling or thought. (NB: After the ad, move a few minutes into the recitation to hear its tone).

Beyond the expressionless, empty repetitious nature of the rosary, a second and more important problem issue is the Hail Marys. Hail Mary, Full of Grace, The Lord is with thee. Blessed art thou among women, and blessed is the fruit of thy womb, Jesus. Holy Mary, Mother of God, pray for us sinners now, and at the hour of death. Glory Be to the Father, and to the Son, and to the Holy Spirit. The one praying the rosary prays to Mary whom Roman Catholics believe is able to intercede for them in life and at death.

The rosary affirms Roman Catholicism’s belief that Mary is the Mother of God, a position that gives her a unique inroad into the presence of God. She can beseech her son on our behalf to send favors our way. This magnification of Mary has been a major issue that separates Protestants from Roman Catholics. While we may recognize Mary in the New Testament as the mother of the earthly body of Jesus, Mary has no special part to play in our salvation. She is not a co-mediatrix as is affirmed by many Roman Catholics. The goal to officially recognize Mary as co-mediatrix has been prominent in recent Catholic discussions. “‘Of course, Mary is the Co-redemptrix! She gave Jesus his body, and the body of Jesus is what saved us.’ The salient words of the late Mother Teresa capture how the fiat of Mary to become the Mother of God began her providential role as the Co-redemptrix.” (Source)

So, why does it matter that Francis is urging Catholics world-wide to pray the rosary during May? Well, the world’s population is now estimated at 7.7 billion. Of these, about 1.2 billion are Roman Catholics. Their spiritual leader has urged them to pray a false prayer to a false saviour for a false hope. True believers should weep over this darkness.