I mentioned last week that I was working on a writing project for a new dictionary of Christian history. One of the entries I was assigned to write was the entry on MLK. Here is that entry 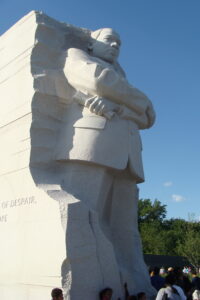 King, Martin Luther Jr. (1929­­–1968) was an African-American Baptist pastor and Civil Rights leader who was assassinated on 4 April 1968 in Memphis, Tennessee at the Lorraine Motel by James Earl Ray. King had gone to Memphis to aid the Memphis sanitation workers in their strike for better treatment and higher wages.

MLK was born in Atlanta, Georgia, to Michael and Alberta (nee) Williams in 1929. “Daddy King” was an alcoholic sharecropper’s son from rural Georgia who left the farm and came to Atlanta where he eventually met Alberta, the daughter of A. D. Williams, pastor at Ebenezer Baptist Church. Michael succeeded Williams at Ebenezer when his father-in-law died in 1931. In 1934, at the behest of the church, Daddy King traveled to Berlin to attend the Baptist World Alliance and came face-to-face with nascent Nazism. He toured Germany during that visit and witnessed the rising threat. Following the trip, King returned to Atlanta and had his name changed to “Martin Luther” after the well-known German reformer. He had his son’s name changed as well. Going forward, they became Martin Luther King, Sr. and Jr.

MLK Jr. was raised in a pastor’s home during the height of the “Jim Crow” south, experiencing the racism commonly directed toward the African American community. Jr. was admitted to Morehouse, the college of both his father and grandfather, in 1944 as a junior in high school, after Morehouse expanded its enrollment to permit younger students who could pass the entrance exams. This was driven by the decreased enrollment due to the need for soldiers during the Second World War. After Jr. graduated in 1948 at the age of 19, he enrolled at the Crozer Theological Seminary, a Northern Baptist school in Upland, Pennsylvania, where he became the student body president. At Crozer, King was introduced to the Social Gospel ideas of Walter Rauschenbusch. Following his graduation from Crozer with his B.D. in 1951, he attended Boston University, where he studied theology under Edgar S. Brightman, who was then promoting Boston Personalism. King graduated with his Ph.D. in 1955, submitting as his dissertation, “A Comparison of the Conception of God in the Thinking of Paul Tillich and Henry Nelson Weiman.”

During his doctoral studies, he began his first pastorate at the Dexter Avenue Baptist Church of Montgomery, Alabama at the age of twenty-five. Also, he met and married Coretta Scott, a music student at the New England Conservatory of Music 18 June 1953. While pastoring at Dexter Avenue, King led the Montgomery Bus Boycott (1955), begun after Rosa Parks (1913–2005), a seamstress and civil rights activist, refused to give up her seat on a Montgomery bus for a white passenger. King, who was by this time becoming active in the early Civil Rights movement, advocated a position of non-violence, spurred on by the influence of men like Mahatma Gandhi (1869–1948). He was arrested after turning himself in and fined $500. It was the first of thirty arrests King would experience during his brief career.

In 1957, King and others formed the Southern Christian Leadership Conference to help organize black churches to protest civil rights abuses through non-violent means. In April 1963, King was arrested for his 13th time and incarcerated in the Birmingham jail under the supervision of Theophilus Eugene “Bull” Connor, Commissioner of Public Safety. From jail, King penned “Letter from the Birmingham Jail” which argued that oppressed people had the duty to seek the end of their oppression through non-violence.

A few months later, King was in Washington, D. C. at the “March on Washington for Jobs and Freedom” that saw more than one quarter of a million people attend. At that rally, on the steps of the Lincoln Memorial, King delivered his famous “I Have a Dream Speech” which became a catalyst for the enactment of the Civil Rights Act (1964). He was awarded the Nobel Peace Prize at age 35 in 1964, the youngest man ever to receive this honor, for his promotion of non-violence in the struggle for civil rights. King remained at the forefront of the Civil Rights movement through the next four years, also objecting to the War in Vietnam, delivering a speech, “Beyond Vietnam,” before an audience of three thousand at Riverside Church of New York City. He was controversial, charismatic, and courageous. His life and work are memorialized at a national center, The Martin Luther King Center in Atlanta and at the Ebenezer Baptist Church next door, the church he co-pastored with his father after his departure from Montgomery in 1959.

As can be seen, the entry is brief and offers little commentary. I grew up in the era of Dr. King. I have vague memories of the struggle for civil rights. I have little to no recollection of the churches (Episcopal) I attended during my childhood. Except for one sermon. It was after the death of either MLK or Robert F Kennedy—they died within two months of each other April 4 and June 6, 1968, with MLK killed first. The minister lamented the number of guns he had bought his children over the years, that they could fill the railing around the altar. He proceeded to preach on gun control. I don’t remember what he said, just the occasion for him saying it.

I remember the struggle to make MLK’s birthday a holiday. Many Christians vigorously opposed a day to honor him, especially where I went to university. I had no knowledge of the sensibilities of the school I attended through the 1970s when I went there. I met a fine student who influenced me to attend at a time when my life was largely directionless. I learned much there, and I have great appreciation for the men and women who were my teachers. As with any institution some instructors are better than others, but I had some fine Christian teachers.

However, the school was still struggling with its racist past. I was there when African-American students were first admitted to the student body but with no allowance for interracial dating. I hadn’t been schooled in the issues of racism by then and I can honestly say that while attending, I have few recollections of overt racism, except the color bar for students–we had oriental students when I started just no African American ones. Subtle racism perhaps, but overt? Seldom. As I matured, I entered ministry and went to Canada, to work among the Ojibwe Indians. The racism I encountered there was anti-Indian. There were few blacks living anywhere near where I was. My second ministry was further north in Alberta. More indigenous peoples, few if any blacks. But still plenty of racism.

I encountered white racism against blacks when I returned to the US to pursue my PhD. The Georgia church I attended had few African Americans attending. I didn’t give it much thought as we were in a northern Atlanta suburb that seemed predominantly white. However, in time, a few men in that church let loose with some ugly comments that let me know I was in the deep south. These men were old enough to be my father. I winced at their comments and wish I had said something to rebuke them, but I felt embarrassed to challenge them. Then I came to Minneapolis to teach and heard a respected leader utter a reprehensible racist joke under his breathe while preparing to speak in chapel. I did challenge the man afterwards.

Sadly, racism is ever present with us. Am I a racist? I hope not. Through my teaching career, I was constantly reading and thinking through the material I taught my students. I was also aware of the tensions in the wider evangelical world. Over the years, I made about a dozen trips to Africa to teach African brothers church history. I wanted to be sensitive, so I tried to tailor my notes to reflect their world. I developed a History of Christianity in Africa course. However, my course on Baptist history was almost exclusively a class in white history. Why was this so? There were important African American preachers, many of them former slaves, that left their mark for Christ. Why didn’t I discuss them? I worked to expand my notes.

I said all this to say that today our nation remembers MLK. He was a Baptist. He wasn’t a conservative. I heard once that King wanted to attend a more conservative school but was denied enrollment. He attended Crozer, then under the grip of theological liberalism. He embraced their theology. He also was deeply flawed. In 1991, a panel of Boston U scholars determined he plagiarized in his dissertation. The FBI dogged him as “the most dangerous man in America.” Because he advocated the violent overthrow of his government? Hardly. Just the opposite. They didn’t like his ideas. King left a mark on American history that cannot be ignored. I have often wondered recently how much of the anti-King rhetoric I heard over the years was generated more by racism rather than by a desire for orthodoxy. He was vilified by many professing Christians down through the years. But America’s leaders have all been deeply flawed men and women.

In 1964, my alma mater gave Alabama governor George Wallace an honorary degree. The same George Wallace who the year before when inaugurated as governor of AL stated “I say segregation now, segregation tomorrow and segregation forever!” Between MLK and George Wallace, who was the better man? As an historian, it is my duty to remind us of our history—the good, the bad and the ugly. MLK is an important part of the American story. It is fitting that we remember him today.