Looking Back, Looking Ahead, Part One – The Unexpected Birth

These are interesting days in the Straub household. After sixteen years in the same job, rather unexpectedly, I find myself displaced. At nearly 64 years old, I am seeking a new direction in life. Admittedly, this is not what I had hoped for at this juncture, but it clearly is what the Lord has planned. As Proverbs 16:9 reminds us, “The heart of man plans his way, but the LORD establishes his steps” (ESV). Having walked in this world as a Christian for more than 45 years, we have followed the path the Lord has laid before us but, again and again, we have not always had the clarity we would like. Having said that, as my wife and I have prayed about our next steps in this faith journey, we have decided that I will concentrate on research and writing for the time being, seeking to use the gifts the Lord has given me to advance the cause of the Gospel and encourage the Lord’s people. Just this past weekend, I had the joy of ministering in a conference outside of Massillon, Ohio for Tim Mishler, of Calvary Baptist Church, a former graduate school roommate and dear friend. We have occasionally been together as families over the years, but he has served the Lord faithfully in his corner of the Lord’s vineyard, while I have tended to the Lord’s work elsewhere. It was good to renew fellowship, catch up on life events that have transpired in the intervening years, and reflect on our individual paths. I may write an essay on that conference in the days ahead but for now, I want to begin a series that I have entitled “Looking Back, Looking Ahead.”

Periodically, I will write autobiographical essays addressing the journey upon which the Lord has placed us to ponder some of the life lessons we have learned along the way. For now, I will omit the first fifteen years of the story, from the time Rebecca and I met through until 1990, the year our third child was born. 1990 will always be one of the most blessed and painful years of our lives. It was a year of blessing as we anticipated the birth of another child, a boy. Our first child had been a girl, Joanna, our second, a boy, Benjamin, and now number three was on his way, another son whom we would name Joshua. Oh, the excitement and anticipation of another son, someone to carry on the family name. My grandfather Paul had three sons, Richard, Walter and Robert Jack. They each had a son, Jeff, Robert, and Timothy. But I alone, of the Paul Straub heirs, had male offspring. It was up to me to keep the family going, and now we were expecting another son to help with this burden.

While 1990 opened as a year of great excitement, it would soon become a year of intense grief. Joshua was due in June, but he decided to make his appearance ten weeks early, in mid-March. His premie birth set us on a path that has led us to where are today—a path of blessing and struggle, of failure and faithfulness—our failure but God’s faithfulness. I want to reflect on these past thirty years and address the challenges through which we have come and by which we have learned to depend upon the Lord more deeply. I hope that our journey will be a blessing and encouragement to others. Ours is a journey into the world of disability . . . life-long, severe, painful, heart-wrenching disability. As I write this essay, Joshua is trying to manage debilitating pain. At times, his pain is excruciating. UPDATE at noon: Since posting this essay about an hour ago, Rebecca has taken Joshua to Urgent Care to try to get pain relief. Thank you in advance for prayer on his behalf.

Joshua Peter was born on March 24 while we were living in High Level, Alberta where we had moved so that I could continue in ministry. We were serving the Lord with Maranatha Baptist Missions of Natchez, Mississippi and had chosen High Level, about as far north in Alberta as one could live at that time and still be “in civilization.” The town was at the crossroads of the MacKenzie Highway and Highway 58 just about mid-way between Edmonton and Yellowknife, Northwest Territories. It started in the late 1940s and became the local trading center for a population of about 15,000. Having worked among Canada’s Ojibwa peoples in Manitoba in our first ministry, we targeted High Level as a base of operations because there were a number of reserves nearby where we might start a new ministry among indigenous peoples. Soon after arrival, it became clear that another church needed to be started in the town which might serve as an anchor for outreach across the northern portion of the province. During the early days, we did ministry in Fort Vermilion, in La Crete and in the Dene Tha’ Nation. We also set to work planting the MacKenzie Highway Baptist Church. 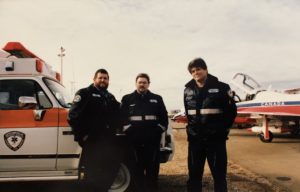 Working at a Canadian Forces Snowbirds event in High Level with the ambulance crew in the late 1980s.

At the same time, I began to work as an EMT in addition to my church planting efforts, to supplement our income. I worked “on call” which allowed me to tend to other things while I waited to be summoned for an emergency. The work also expanded our ministry. It was both interesting and it facilitated ministry as I got to know many of the area residents through this secular work. We were about three years into the church plant when we learned that we were expecting Joshua. This was exciting news: to think about another family member on his way! One day, I was finishing up a medevac in Fort Vermilion and I received a call from the dispatch in High Level that I needed to return to base ASAP as a medevac from High Level to Edmonton was pending. At the same time, there was a medevac in the works in Fort Vermilion, fifty miles east of High Level. I called the station to suggest I stay put to catch this patient while another medic could be sent to handle the pending High Level patient. No I was told, I needed to return ASAP; the patient in need of a medevac was Rebecca, whose water suddenly started to leak. She was ok, but the hospital wanted her in the city in case things progressed and the baby needed to be delivered early. Of course, I nervously returned to High Level and prepared to take my wife via air ambulance to Edmonton so she could be cared for.

The trip by air back to High Level was an anxious one. I needed to make arrangements for Joanna and Benjamin to be cared for in my absence while I flew Rebecca to Edmonton. The city trip would take a minimum of six hours between the transports to and from the hospitals on either end of the flight and the two plus hours of flying time each way depending on the wind. We finally arrived in Edmonton in the evening and I saw that Rebecca was settled at the hospital. Tests were under way and medication was given to slow the contractions with the hopes that delivery could be deferred to allow the baby additional time to develop. Could they stop the leakage of the fluid? How much water had she lost? There was the danger of infection. All of this would take time to assess. In the meantime, I needed to return to the north to care for my young children. So I prayed with my wife and said goodbye. I returned to the airport and boarded the twin-engine plane for the trip home to wait to see what the outcome might be. I didn’t have to wait long. About three days later, the baby came, ten weeks ahead of schedule. We were the proud parents of a newborn son, 3 lbs, 9 oz. This was the beginning of our thirty-year journey. We had no idea what lay before us. But God did. Could we trust Him?