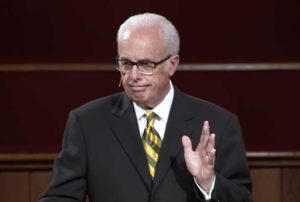 There has been a lot of back and forth over Grace Community Church’s decision to defy the LA order against church gatherings. Coupled with restraining orders and their lifting, GCC has not only to contend with the civic officials who wish to stop the mass meetings at churches, ostensibly to slow the spread of COVID, it also must address concerns of Christian brothers who oppose their opposition to the restrictions. Part of the argument put forth by GCC is that the stopping of large gatherings seems to be applied unevenly. Churches need to close but other mass gatherings, e.g. civil protests, can go ahead. MacArthur answered that the GCC church is a “peaceful protest.” Among the arguments GCC has used in support of going forward with regular services including the rejection of social distancing and the wearing of masks (curiously changing its earlier position) is that believers are commanded to gather to worship and sing, a necessary part of worship. GCC uses other arguments but for a Christian, this is the most important–Christians are obligated to assemble and worship (Heb 10:25)

Against this practice are several megachurches that have determined to NOT assemble until next year. JD Greear’s Summit Church and Andy Stanley’s North Point Community Church are among the most prominent. Admittedly, a church deciding in advance to have no gathering months ahead is problematic in biblical terms. Perhaps the virus will suddenly disappear. Ok, this seems unlikely. But how can a church simply decide not to be a church? Greear’s solution is 2400 house churches. An interesting solution. But here’s the question–if this is a good solution, why have a megachurch at all? Why not simply disband the large in favor of the small and intimate? Will COVID be the end of megachurches as we know them? This also seems unlikely, but this pandemic may give an opportunity to reflect on what a church is and what it should look like.

In the midst of the repartee, there have been several good essays (here and here) on the issue of opening or staying closed. Not that any particular essay or position is the final word. However, the conversation is both good and necessary. What GCC might need to do in southern California may be different than what someone else does in Utah or North Carolina or Florida, now among the states hardest hit by COVID. There is no “one size fits all” answer to this issue. At least not yet. So it is good and healthy that brothers talk to each other–iron sharpening iron–to fine-tune our arguments and heighten our sense of biblical obligations.

I must say–“Why in the world would John MacArthur, at his age, wish to risk going to jail?” Because truth matters? Because of biblical commands? Because of Constitutional guarantees? John reminds me of Polycarp, that aged saint who perished in the flame rather than deny his Lord. John could simply say, “This is a young man’s game!” “I’m too old and too tired for another fight!” I thank God for John’s courage. Some may think he is grandstanding, but the man has a significant legacy of doing right. Why impugn his motives now? Let’s argue his views, not his motives. John raises one important question that all believers may be called upon to answer in the very near future–How much government control of our lives will we tolerate? Is there a limit to what we will tolerate from OUR government?

For what it’s worth, GCC is not breaking the law. It is following the law, as in the Constitution of the United States, the basis of every civil law in the land. The Constitution bars the state from restricting religious assembly. At all times and in every situation? Well, yes. Because if the state were given power over churches, that power would surely be abused. But is this the only issue? The issue may not be as simple as what we can do but rather what we should do. What about loving our neighbors as ourselves? Does our command to worship God trump (sorry, poor choice of words) our duty to our neighbors? If we put the problem this way, the answer is obvious. God always comes first. So the next question is, must we worship in a particular way to demonstrate that God comes first? What is ultimately wrong with holding two or even three services to allow for social distancing? Ok, what does this do for communion? Doesn’t the church need to gather to observe? As a committed Baptist, I would say yes, but over the years I have seen (and practiced) “partial church” communion. No I am not suggesting a new category in communion studies. But many churches have communion when only part of the assembly is present. If the argument that the WHOLE church needs to be present and we are talking about a megachurch, then maybe what we should be asking is whether or not holding large assemblies of people is really church in the first place. In what sense is the megachurch a church? Their significant size makes whole body life difficult or even impossible. Ah, comes the ready answer–this is the reason for small groups. Small groups minister to individual believers to facilitate body life. Ok, if we are back to that again, that large gatherings cannot do some things, then maybe this is where the conversation should go.

Are churches with thousands of members or adherents or attenders really churches in the first place? Have these churches grown through evangelism or through sheep reallocation? I remember when Chuck Swindoll decided to start a church in the Dallas area in the late 1990s. CT had an article describing how the new church plant went viral. It was simply sheep reallocation not church planting consisting of evangelism and discipleship. I imagine the same may be said of many megachurches. They pop up and “grow” as people leave other churches. But then as we have seen, they fade as fast as they appear (e.g. Mars Hill of Seattle). So are these mega-gatherings really churches in the biblical sense of the term? Maybe COVID gives us a great time to reflect on the nature of the church.

I cannot say infallibly why God ordained COVID. But He certainly did. Maybe He planned these days to provide time for His people to rethink a lot of things that we do or take for granted–the place and priority of worship, the concept of church, the line over which we cannot cross out of obedience to God rather than the government, etc. I say, let these conversations continue while we beg God for mercy, wear a mask and practice social distancing as best we can.
.