Into the Church of Rome? An Evangelical Goes Home?

Social media and the religious press are talking much about the recent conversion of former Christianity Today editor Mark Galli, at one time a Presbyterian minister, who became an Anglican, flirted with Orthodoxy, and has now been received into the communion of the Church of Rome this past Sunday. He recently made a name for himself calling for Donald Trump’s impeachment, one of the few evangelicals to publicly do so. Galli is hardly the first or even the most prominent former evangelical to “return to Rome,” but he is the latest in a long line of evangelicals that are ensnared by the “smells and bells” of the Church seemingly overlooking its significant heterodoxy. He wanted to take his Anglicanism “deeper and thicker.”

In 1991, my family and I relocated to Windsor, Ontario from northern Alberta in the late summer to better care for our one-year old premie son. We were told that moving out of the North would come, so we decided for Joshua’s sake, that sooner was better than later. We considered our options and chose Windsor as our new home, believing that the services we would need to help our infant son would be readily available.

Soon after arriving in town, I had occasion to meet the pastor of a good Baptist church in the city who he asked me what we would be doing for church. Being there for less than a week, this was not a question I was prepared to answer. Dave informed me that the Sunday previous, another Baptist church in the city had its pastor resign. It seems that this other man decided he would be more at home in Anglicanism. In the providence of God, we were living fairly close to this church, so I decided to drop in for the mid-week service. On arrival at the church, a small assembly of perhaps 80–90, I met Paul, a man about my age, who was wrapping up his ministry, intent on a significant life change. I also met church members who, when learning about my own journey as a Baptist pastor, began to consider whether the Lord had brought their next pastor to them without their searching, even before their former pastor left.

I would like to rehearse just how the Lord brought us together, pastor and church, but I will leave this for another day. Suffice it to say, that by November, I was the church’s next pastor. Soon I was hearing about the ministry of my predecessor, a man who had been at the church but two years. It seems that he actively studied for the Anglican ministry in Windsor while pastoring a Baptist church. When asked by a church member why he didn’t resign once he perceived his theological direction, he apparently stated that he had to feed his family. The church was vexed that their Baptist pastor would soon become an Anglican. One older saint told me that she once stood up in a service and waved her cane at the man, complaining that he was trying to make the church Anglican (or Catholic, I just forget which).

As I got to know the lay of the land at Emmanuel, I learned that Arnold Dallimore, the Canadian biographer of George Whitefield, had been a former pastor (an interim between the church’s founding pastor and the church’s second regular pastor). Arnold had pastored for a number of years in Cottam, Ontario, just a few miles up the road from Windsor, and my predecessor, the new Anglican, had been a member of his church, Cottam Baptist Church, as a young man. Dallimore and I periodically discussed the man’s transition. In fact, Dallimore, I believe, recommended the man go to Toronto Baptist Seminary. My predecessor graduated in April 1982, at the top of his class, delivering the valedictory address opposite the commencement speaker, Don Carson. After TBS, my predecessor worked in Baptist churches in Ontario, including in Toronto and later in Sudbury with John R. Boyd, a T. T. Shields stalwart. He eventually came to Windsor at the end of the 1980s, taking up the small pastorate of Emmanuel.

His Windsor ministry was unremarkable, likely due to his theological pilgrimage then under way. The church not only practiced open communion, it also practiced open membership. As I was filling the pulpit in the weeks before I was actually called to the church, the treasurer called me one day and asked me if I would baptize him. Odd to have a member of a Baptist church not baptized! Apparently my predecessor told the man, who had been baptized in Methodism (not by immersion), that the mode of his baptism was inconsequential. Though he felt otherwise, my predecessor would not baptize him. After my predecessor left the church, the treasurer followed the Lord in believer’s baptism!

I told this story because I have seen the havoc done in a small way when a man goes from evangelicalism into the church of Rome. Thankfully Emmanuel had Tilly and others (e.g. Arnold Dallimore’s son Paul) who saw the errors of their pastor’s direction and did not follow him, either into Anglicanism and or into Rome. As recently as last year, my predecessor, who not long after becoming an Anglican was received into the Church of Rome, was still saying Mass in Catholic churches in Ontario, thirty years later.

Having studied church history formally for the past twenty years, including visiting many of the major Gothic cathedrals of Europe, I am perplexed to understand how someone with true evangelical (gospel-centered) faith can become a Roman Catholic. To be sure, if you know what you are looking for, the Gospel can be found in the carvings and images of many Catholic churches. But the message is confused and clouded by a host of other things mixed in. It’s a little like looking into a garbage can outside a fine restaurant’s kitchen. You can see the leftovers of good food, but it’s mixed in with the waste of the kitchen so that if you tried to eat what you saw, you would become very ill. 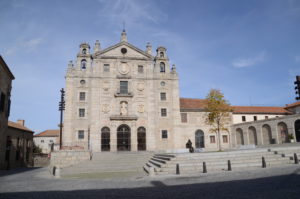 A few years back, while visiting Avila, Spain, I saw one of Teresa’s fingers on display. At other churches across Europe, there are bone fragments allegedly from one of the disciples, pieces of wood allegedly from the cross, and of course there is the famous Shroud of Turin which supposedly was the burial clothe of Jesus, complete with his image forever imprinted into it. In Montreal, Quebec at St. Joseph’s Oratory, there is the heart of Brother André Bessette who was a lay Catholic leader to whom people came for healing. He became Blessed Brother André in 2010 when Benedict XVI recognized a second miracle allegedly coming after the intercession of André. On a visit to Fatima, Portugal, one can see shrines to the three shepherd children who allegedly saw an apparition of the Blessed Virgin in 1917. And the list goes on. These relics and holy sites offer blessings and miracles in abundance to the faithful who seek them. Similar extra biblical accoutrements can be found around the world in Roman Catholic churches large and small.

This doesn’t even begin to address the official theology of the Church of Rome. In the mid 1990s, a group of evangelicals and Catholics started a confab highlighting the similarities of the two movements (supposedly we are more alike than different) and downplaying the differences. I attended one of these meetings in Minneapolis in my early years at Central. I listened as men around the table talked much of their mutual agreement on justification by faith. Well, Rome has never denied justification by faith. What she denies is sola fides—justification by faith alone. That final word utterly separates biblical Christianity from everything else, including Roman Catholicism. For Luther, Calvin and Zwingli, salvation came only by faith plus nothing, minus nothing. Rome in its response to the theology of the reformers anathematized sola fides (Trent, Sixth Session). Whole books, starting with the Reformer’s writings themselves (and before) unpack the real and significant differences between Roman Catholicism and evangelicalism. If anything, those differences are more significant today.

I don’t know Mark Galli nor am I qualified to judge his heart—this is the work of the Holy Spirit. But I can evaluate his actions. To embrace Rome is to embrace error—unmitigated, unvarnished, and unrepentant error. I for one am sad to see a former professing believer go into the Church of Rome. It’s a bit like dumpster diving in the back of a great steak house: you might find something edible, but more likely you will find much that will kill you. God be merciful and keep us from falling (Jude 24).