Difficult Days for Our Canadian Brethren

We are now a year into the COVID pandemic and although vaccines have been rolling out for Americans and the Brits, much of the rest of the world is waiting in a long line to receive major shipments of one of these potentially lifesaving elixirs. Americans have two available vaccines—Moderna and Pfizer with a third from Johnson and Johnson, seemingly days away from government approval. Predictions are that, with the approval of the latest vaccine, every American who wants a shot will have one available by June. It is too early to know when we will reach “herd immunity,” and if this is a temporary fix or if we will need annual shots to keep us immune. These are uncertain days to be sure.

Our neighbours to the north are in a different situation. Canada has no vaccine manufacturing capacity at this point, so they will need to secure doses from American suppliers. Naturally, these same suppliers are showing preferential treatment to Americans because of national interests. This leaves Canadians more vulnerable as they await the arrival of significant doses to meet their population’s needs. A vaccine from Astra Zeneca is scheduled to be approved by Health Canada in mid-February. According to estimates, Americans currently are vaccinating ten times more people than Canada (Canada is .05 people per 100 daily while the US is .45 people per 100 population). The UK has vaccinated 5x the number of its citizens proportionately. All of this made Canada 20th in the list of developed nations to get its citizens vaccinated at the end of January.

Of course, this is unwelcome news for Canadian citizens, but it also places an even greater hardship on Christians north of the border who are facing more stringent COVID-driven church closures. Beginning on Boxing Day (December 26th), Ontario Christians, under the Reopening Ontario Act, were prohibited religious, in-person gatherings of over ten people. This effectively meant churches could not assemble as a church until further notice. At the same time, big-box stores could operate at 25% capacity while grocery stores and pharmacies could permit 50% occupancy.

A handful of Ontario churches as well as churches across western Canada felt that these restrictions were both contrary to The Charter of Rights and Freedoms and inconsistent—big-box stores are essential, but churches are not? Why are churches not given equal consideration? A few church leaders decided that, under The Charter, they did have the right to meet and chose to do so, defying government shut-down orders. In recent days, one church has been in the news prominently for continuing to hold services, despite the restrictions.

Trinity Bible Chapel of Waterloo, led by Jacob Reaume, a Southern Seminary MDiv graduate, now faces contempt of court charges and fines that could reach $10 million. Present at their last in-person meeting was a member of Ontario’s Parliament, Randy Hillier, who joined the group as a sign of solidarity. The church is being defended by Lisa Bildy from the Justice Centre for Constitutional Freedoms who hopes to make an argument for the church using The Charter. The church recently received a contempt charge for its failure to comply. After heavy possible fines were pending ($10,000 to $100,000 for each of the six elders and fines for the church), the church agreed to suspend further in-person meetings, until the lifting of the closure order.  For now, however, there will be drive-in meetings instead. 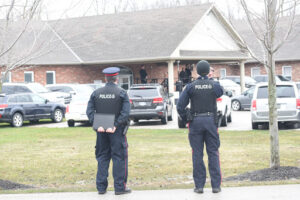 The other Ontario church in the news for months is a church in Aylmer led by Henry Hildebrant, the Church of God. Lately, the church service started with a drive-in service, but the pastor led a group of people into the building, defying the lock-down restrictions. This resulted in some people receiving tickets of $880. Again, the issue is consistency and The Charter. Why can some businesses open while churches have very tight restrictions? The church continued to meet, defying government restrictions and fines were levied against some who attended. The Ontario Attorney General issued a cease-and-desist order, demanding the church comply. Interestingly, no arrests have been made to force compliance.

A church in Alberta, Fairview Baptist Church, led by Tim Stephens, was planning a similar strategy of defiance for biblical and legal reasons but has since decided that the church will remain closed for the duration of the COVID pandemic in accordance with provincial legal requirements. Meanwhile, on Monday, a church in Edmonton was charged with violating Alberta’s closure rules, apparently repeatedly. Its pastor was arrested by the RCMP.

This week, word came from British Columbia that its provincial health minister is seeking an injunction against three churches, Riverside Calvary Chapel of Langley, Immanuel Covenant Reformed Church of Abbotsford, and the Free Reformed Church of Chilliwack, who continue to defy the lockdown rules. Calgary-based Justice Centre for Constitutional Freedoms petitioned the British Columbia Supreme Court to consider whether or not BC’s rules violates Canada’s Charter of Rights and Freedoms.

All of this comes with other measures recently imposed on Canadians. Last week, Canadians were told they could expect a three-day quarantine at designated hotels on their return to Canada by air at a cost of $2000 for which they are responsible. Flights have been canceled between Canada and Mexico or the Caribbean. Some Canadians, intent on escaping winter, travel to the US by helicopter, their cars being transported across the border, so that they can then drive south to escape the cold.

Having pastored in Canada for nineteen years, I have wondered how I might have handled this situation if I were still a pastor there. My former church, Emmanuel Baptist Church of Windsor, Ontario, is complying with the Ontario restrictions and ministering to the church online. Pastor Scott recognizes the limited nature of these meetings, but he and church leaders are attempting to make the best of a difficult situation. Everyone recognizes that there are some things that cannot be done in online formats. At the same time, Kevin told me recently of unique ministry opportunities the Lord has afforded him because of these lockdowns.

One of the issues compounding the situation in Canada is the limited availability of COVID vaccines. Moderna was not expected to deliver any doses of the vaccine to Canada this week, leaving the country with only 70,000 doses remaining. Part of the challenge is that to date, there are only two approved vaccines in Canada. Canada hopes to get 335,000 doses next week and 400,000 doses the following week. With only a small percentage of the population having received the vaccine coupled with new strains of the virus entering Canada (experts predict that by the spring, the UK-variant will be dominant), there seems little Canada can do but to hunker down and tighten restrictions as they weather the storm.

Churches are caught in the crossfire. Even here in the United States, with COVID vaccines ramping up, there is still a big measure of uncertainty. School boards are wrestling with the desire to reopen to in-person learning. Conferences are trying to determine whether to plan in-person meetings. And churches are looking forward to the day when things will return to “normal” whatever normal is. These are unprecedented days for our brothers and sisters north of the border. Lord, teach us to number our days!