This week has been an extraordinary one for writing topics. On a personal level, Minnesota is in the midst of a record-breaking heat wave and we were without air conditioning over the weekend. On Saturday, Minneapolis broke a high temperature record, hitting 100! We were able to get an HVAC man to look at our unit on Monday. The good news is he got it working. The bad news is that the whole system needed to be replaced. Well, it was fifteen years old! Not a cheap repair! The new unit was installed yesterday.

As for Christian topics worthy of consideration, there is the leaked letter to SBC president J. D. Greear from Russ Moore, former president of the SBC Ethics and Religious Liberty Commission outlining his reasons for departing the SBC recently and serious charges against Paige Patterson, former president of the Southwestern Baptist Theological Seminary, of theft of property and financial misdirection. Both issues are sure to make for a tense 2021 SBC meeting in Nashville in a few days. Add to this, news out of Canada that James Coates has lost another round in his fight with the Alberta authorities over efforts to keep GraceLife Church open as normal despite a potential public health crisis. I have been following both stories very closely because of my history with both the SBC and Canada.

However, the subject for my essay this week is yet another iteration of modern Christianity that I have studied, observed personally, and written on over the past decade—global Pentecostalism. On Saturday, June 5, “Prophet” Temitope Balogun (aka T. B.) Joshua died at the age of 57, following a service in Lagos, Nigeria. No cause of death has yet been released. Joshua was the founder of the Synagogue Church Of All Nations (SCOAN), home to Emmanuel television station. Joshua was among the wealthiest African Pentecostal Prosperity-Gospel preachers, purchasing a $60 million G550 Gulfstream jet in 2015. Nigeria is home to a number of high profile Prosperity preachers including David Oyedepo of Living Faith Church Worldwide International, Chris Oyakhilome, founder of Believer’s Love World in Lagos who was recently fined £125,000 by the UK broadcasting regulatory authority over COVID misinformation, and Enoch Adeboye of Redeemed Christian Church of God. The stunning reality is that though preachers like Joshua promise cures for a variety of maladies including blindness and HIV, (Joshua once claimed that he could cure homosexuality, but YouTube canceled his channel as a result), and even raising the dead, they have no ability to stop the death angel from visiting them at their appointed hour (Hebrews 9:27). In passing from this life, Joshua joins all other faith healing preachers who were unable to cure the ultimate human disease—death—including  Kathryn Kuhlman, Oral Roberts, 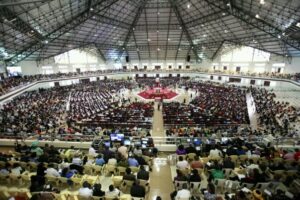 Having taught in East Africa for the past dozen years, I have had numerous opportunities to visit Prosperity Gospel churches (including two different Winner’s Chapel sites in Nairobi) and listen to the messages delivered by their stage personalities. The preachers were impeccably dressed and coiffed, men as well as women. The system of money collection is nothing short of amazing in these churches. In one church I visited, large, wheeled garbage cans were brought into the auditorium, and ushers walked through the crowds passing out “tithing” envelopes for the faithful. Tithers stood to be recognized and they were given the first opportunity to come forward, very publicly, bringing their tithes to the Lord and placing them into the awaiting wheeled carts. While they were coming, there was singing and exhortations for others to grab an envelope from an usher and join them in their processional. In the large church, throngs of people made the journey, from across the auditorium, out of the balcony and down to the platform to contribute. This tithing ritual is a key component of the Prosperity Gospel. PG teaches that if you want God to bless you, then you must be faithful to God and bring your tithes and offerings to him (in the person of the PG preacher). According to David Oyedepo “All financial testimonies in the Body of Christ are rooted in consistent tithing.” “Any believer who is not a tither will remain a financial struggler.” “It is impossible to be in command of financial fortune without being a tither.” This teaching prompted one well-known historian of the PG, himself raised as a Pentecostal, to suggest that the only ones who really prosper in the PG are the preachers, as the recipients of the peoples “tithes.”

Just how is it possible for PG preachers to thrive in the poorest country in the world? Nigeria is considered the poorest country because of the percentage of its population living in poverty (40% as of 2019). Nigeria, Africa’s largest country, with a current population of 209 million, is projected to become the third most populous country in the world by 2050. Currently it is estimated that nearly 87 million people live in extreme poverty, defined as living on less than $1.90 per day. Of this number, 73.5 million people live in rural areas, while 13+ million in urban areas. Nigeria’s Gross Domestic Product was measured at 448 billion in 2019, equating to $2230 per capita, but in Nigeria, people in extreme poverty are living off less than $400 per annum.

Why does Nigeria have such extreme poverty? At least three reasons have been offered—corruption which includes mismanagement of its resources (oil), unemployment (estimated at 50%) and inequality, “Nigerian women are subject to unequal treatment in terms of labor, education and property.” Corruption is the single greatest threat to the Nigerian poverty level. It is estimated that by 2030, 37% of the country’s GDP will be consumed by corruption. OXFAM estimated that $20 trillion was stolen from Nigerian coffers by corrupt officials between 1969 and 2005. Sadly, while many government officials enrich themselves at the expense of their fellow citizens, PG preachers follow the same greed-filled pattern, taking advantage of some of the most vulnerable.

The richest man in Africa (for the past ten years, with a net worth of about 12 billion USD) is a Nigerian, Aliko Dasngote, who made his fortune in cement, Dasgote Cement, Africa’s largest producer. So where do the PG preachers fit in? The wealth of the ten richest pastors in Nigeria (Joshua is fourth on the list) totals about $700 million. Rather than these individuals using their influence to fight the tragic cultural and economic situation in Nigeria, they are wolves living off the sheep in the worst sort of way—living luxurious lifestyles in the midst of immense poverty, making promises they are not able to keep, fleecing the few resources that Nigerians have at their disposal for their own personal gain.

The state of Joshua’s soul is beyond my certain knowledge. It is difficult to believe that he knew the God of the Bible given his pronouncements and very public lifestyle, but this is really a matter for the Lord to determine. Africa is in great need of the pure Gospel of Jesus Christ. I thank the Lord to have been affiliated with Central Africa Baptist University and the men and women there who are doing their part to bring the truth of God’s word into the midst of darkness. May God continue to bless their efforts to the praise of his glorious grace!