Some Issues Just Won’t Go Away

Some issues in theological discourse just never go away. Supporters on one side or the other are committed and tenacious in the articulation and defense of their views. Part of the tenacity arises from the belief that the stakes are just too high to surrender. The fight must continue no matter the consequences, or even the collateral damage. Every contest has collateral damage. Patrick Day is a recent example of a rising boxing star who took one too many blows. In 2019, he died four days after he suffered a traumatic blow to his head in his knockout loss to Charles Conwell. Conwell never meant for this to happen and considered giving up boxing as a result of the death. In conflict, things happen. Collateral damage may be unavoidable. So, the question then becomes—is the battle worth the risk?

The evangelical world is in the midst of yet another round of conflict on the role of women in the pulpit. This should come as no surprise really, as God warned humanity in Genesis 3:16 that in the relationship between man and woman, there would be a perpetual desire to rule each other “Your desire shall be contrary to your husband, but he shall rule over you.” 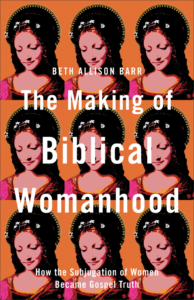 The latest round in the ongoing gender debate is the role of women in the pulpit, specifically as a pastor or elder with a teaching ministry that includes both men and women. Christians have long recognized the duty of women to teach other women (Tit. 2:2). But should women pastor men? What did Paul mean when he said they were to be silent (1 Cor 14:34­–35).

Clearly this discussion is not about ability. There are many good and godly women whom the Lord has raised up to serve in the Church. The question at issue is can women use their gifts indiscriminately or are there roles that they are not permitted to fill? A number of very articulate books have been published recently that argue that “patriarchy,” as Beth Allison Barr calls complementarianism, is a misunderstanding of the Bible, reading cultural issues into Paul’s prohibitions. Barr’s The Making of Biblical Womanhood: How the Subjugation of Women Became Gospel Truth (Brazos, 2021) is receiving broad discussion in the evangelical blogosphere. Support for Barr’s position is widespread. Eg. here, here and here. Last year saw the publication of Jesus and John Wayne: How White Evangelicals Corrupted a Faith and Fractured a Nation by Kristen Kobes Du Mez (Liveright, 2020) and Recovering from Biblical Manhood and Womanhood: How the Church Needs to Rediscover Her Purpose by Amiee Byrd (Zondervan, 2020). The issue of women in the pulpit just won’t go away.

Added to these academic discussions are several events in the SBC such as the recent ordination of three women at Saddleback Church, led by Rick Warren. The night was called an historic night. Indeed! Saddleback is one of the largest churches in the Southern Baptist Convention whose official doctrinal statement excludes women from certain pastoral roles. Exactly what will entail from the ordination of these women is uncertain, but clearly the church and key SBC leaders think that the event is a watershed moment. Al Mohler doubled down his affirmation of the Baptist Faith and Message’s limitation of the office of pastor to “men qualified by Scripture.” Mohler, who is among four proposed candidates for the presidency of the SBC at its Nashville meeting this summer, calls this issue a “looming test” for the convention.

Numerous other Southern Baptists have raised their voices in support. Jason Allen, president of Midwestern and Adam Greenway president of Southwestern joined the chorus as did Denny Burk and Owen Strachan. Predictably, there was considerable pushback, even objecting to Mohler’s connection of the issue with 1 Kings 18:44–45, with one commentator asking “should I take this an indication [sic] that women pastors are ‘Jezebels?’”

Also in recent headlines was the announcement by Beth Moore that she was cutting ties with the SBC. Moore is no stranger in this discussion and has been the subject of contention in SBC circles since she announced in 2019 that she would be speaking at an SBC church on Mother’s Day. Moore was subsequently part of a discussion on sexual abuse held at the SBC annual meeting in Birmingham. Russ Moore (no relationship), moderator for the panel discussion on sexual abuse, addressing the Beth Moore controversy suggested that an SBC that didn’t have room for Beth didn’t have room “for a lot of us.” She also issued an apology for supporting complementarianism. She spoke again at a church on Mother’s Day recently. Her influence is significant across evangelicalism. Some are calling it “The Beth Moore Effect.”

The question to be asked at this point is whither the SBC? Will Saddleback withdraw or be removed from its affiliation? Will the SBC go on record yet again as affirming its understanding of biblical roles? What of larger evangelicalism? I grieve for the discord that this issue is bringing into the “family.” But every family has conflict. Have you ever been to a family reunion that turned into a family brawl? These can be ugly, and their memories linger. Yet sometimes conflict is unavoidable. When one side or the other pushes an agenda that will cause conflict, who is really surprised when that conflict comes and if it produces collateral damage? The SBC is going to have to decide if this is the “right hill to die on.” What the fallout from this struggle may be, only time will tell. Will there be a split, a fragmenting, or a flaking off of some churches who refuse to go with the flow, whatever the flow becomes? Whatever happens in Nashville in a few weeks, it will not end the conversation/conflict. There will be winners and there will be losers. The winners will celebrate, and the losers will regroup or re-form to fight again. This issue will not go away until we stand in the presence of the Lord and He tells us what He meant with what Paul said. By the way, the stakes are high. On the one side, the issue is inerrancy, on the other the freedom for women to preach. May God be merciful to His Church.