Only One Week Left

I don’t know about you, but I will be glad when the events of November 2 are in the rearview mirror. Whatever way this goes, we will have chaos unless God intervenes. Since I am not a prophet, I won’t predict what will happen in the next few days. But I know one thing. God knows. The Scripture says that He works everything (EVERYTHING, E V E R Y T H I N G) after the counsel of his own will (Eph. 1:11). Because this is true, I am not going to recommend that we all sing the Bobby McFerrin’s 1988 hit “Don’t worry, Be happy,” but there are a host of fine hymns we could sing . . . “Great is Thy Faithfulness” or maybe “Immortal, Invisible, God Only Wise.”

I generally resist commenting on politics for a variety of reasons. My first ministry was in Canada where I was a guest in the country for about a dozen years until my wife and I naturalized, becoming dual citizens—well actually citizens of three countries—the United States, Canada and the New Jerusalem. Before we naturalized, I took a passing interest in Canadian politics as I was living there. In the early 1980s, First, we lived in Manitoba where I had occasion to meet our member of Parliament, Jake Epp. I also met the leader of the Reformed Party of Canada, Preston Manning, in the late 1980s while living in High Level, Alberta. Both men were professing Christians. Rebecca and I became Canadian citizens in 1992 while living in Windsor, Ontario, after which time we could vote. I had members in my Windsor church who favored the Progressive Conservatives and some who favored the Liberals. There may have even been those who leaned toward the New Democratic Party (NDP). We certainly had visitors from time to time from across the political spectrum.

Though I could vote and did vote in Canada, I never felt it appropriate to involve myself in Canadian political discourse. I was an ambassador for the King of kings and I did not wish to detract from His mission—the salvation of souls. To discuss politics would have meant alienating one group or another and all Canadians needed the gospel. I have kept up that practice since returning to the United States in late 1999. Most of our time in Canada was spent BC and BI. Before cable and before the internet. So, we didn’t get a lot of detailed American news. When we lived in Windsor through the 1990s, we lived close enough to Detroit to pick up American TV, but we weren’t big TV watchers. We purchased our first real TV when we bought a house in Windsor with some of the furniture, including an old console. But we just didn’t follow American politics that closely.

On our return to the US, I was reminded of how political American Christianity was. Thanks in no small part to the Moral Majority of the 1980s, Pat Robertson of the 700 Club, and James Dobson of Focus on the Family, American evangelicals became a powerful political movement that eventually saw Mike Huckabee, former Southern Baptist minister, run for president in 2008. They have become increasingly more politicized in the past two decades. Now we are on the cusp of another election and the media—mass and social—is consumed with the political process. One cannot look at Facebook without being inundated with ads and friends promoting one party or another.

A few days ago, I violated a personal Facebook rule—never discuss politics on FB. I broke that rule last week when I posted a link to a thoughtful (IMO) comment regarding voting. It took a position not typical of current evangelicalism. My purpose was simply to post an essay that was worth pondering. But it began to attract adverse attention and refutation, detracting from my original purpose, so I took it down. I decided instead to write an essay on pastors and the political process. While I am not currently a pastor, it’s the world I have run in for forty years. So, I want to talk “politics” in the only way I think as pastor should.

I recognize that individual believers have the rights of citizenship which, as Americans and Canadians, include entering into the arena of political discourse. Most of the world has no such liberty. Christians in China, the world’s most populous country, and Russia can say little-to-nothing about politics as well as believers throughout the Muslim world. Since pastors are citizens, many argue that we can and should enter into the arena of political conversation. But even if we can say something, should we? Can pastors go so far as candidate endorsement? At this point in our election, our choices are only bad if character is the issue. But then we are not choosing Sunday school teachers. Neither the thought of four more years of arrogance or four years of utter socialism appeal to me. Nevertheless, as Doris Day used to sing que sera, sera.

Now hold on, I am not a fatalist. But I believe that our election is a part of the settled will of God from eternity past. Does this mean that Christians should throw up their hands, should let go and let God? Should do nothing because God is going to do what God is going to do, without your help or mine? Certainly not. Christians in general and pastors especially have an important role to play this week especially. Christians need to inform themselves of the issues and vote according to their sanctified consciences. Christians should exercise their God given rights and vote. But they should inform themselves and vote for or against what matters most. But what about pastors? Of course, as citizens, pastors should do the same thing. But should we do more?

Let me give you my opinion here based on some historical data. Baptist pastors of the past, the far past, were not heavily involved in the political process. They may have spoken to issues of religious liberty or separation of church and state. They spoke out against the tyranny of slavery and encouraged the government to eradicate that evil practice. But stumping for candidates? Hardly. Running for office themselves? Who? Pastors sought to bring God’s Word to bear on the national scene, not enflame the rhetoric. Were important issues at stake? Absolutely. What saith the Lord?

In 1803, British Baptist pastor Andrew Fuller addressed “Christian Patriotism” from his Kettering pulpit. During that year, the English feared an invasion by the French forces led by Napoleon Bonaparte. Fuller called on Christians to do their part to “seek the peace of the city,” Jer 29:7. He declared

“Such, I am ashamed to say, is that with which some have advocated the cause of negro slavery. It is necessary, forsooth, to the wealth of this country! No; if my country cannot prosper but at the expense of justice, humanity, and the happiness of mankind, let it be unprosperous! But this is not the case. Righteousness will be found to exalt a nation, and so to be true wisdom. The prosperity which we are directed to seek in behalf of our country involves no ill to any one, except to those who shall attempt its overthrow.” 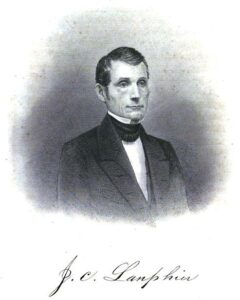 So, following Fuller’s example, what should pastors do today, this week, as we prepare to see God’s will revealed next week? First, we can beseech God for mercy. One thing I find missing from much of the Christian discourse on the political situation in which we find ourselves is any real call for the church to pray. If God is sovereign and in control, shouldn’t we beg Him to do what only He can do? Who knows if God will be gracious? Would to God we see the kind of movement toward prayer that was witnessed in the Fulton Street Prayer Meeting of 1857. Is it too late to ask God to be merciful? Second, we can recognize that God is alive and well and will do what will ultimately bring him glory. The world will not end next Tuesday no matter who is elected. For my part, the end of the world is at least 1007 years away! But it certainly will not end next week. Third, pray for the best but prepare for the worst. Things may get worse before they get better. Our Chinese brothers and sisters haven’t had the kind of freedom we current enjoy ever. Our turn for oppression may come. Are we preparing our people for that day? In a little over a week, we will have a president. Will it be a new one? God only knows. It will be the president that God from eternity past has chosen for America at this time. By all means vote and encourage others to do so. God uses means to accomplish his will. But know that if the election does not turn out the way you wish, then align your will to God’s and trust Him for the future. He is still sovereign. This is my Father’s world!