History is full of dedicated men and women who faithfully served the Lord and were widely known in their generation but who become unknown, a couple of decades or a century after their deaths, because of world events that have relegated their memory to the fog of time. Their recollection is occasionally pondered by the student of church history who may read part of the story they were connected to, but unless someone digs deeply into their history, much of the details of their lives remain obscured. 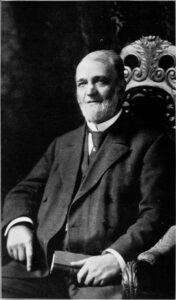 For years, I have delighted in producing biographical essays for the Particular Baptist Press on notable American Baptists. These essays appear in various volumes and include an important essay on Squire Boone, Jr. that corrects received Kentucky Baptist history. For many years, Boone, the brother of the legendary Daniel Boone, was thought to be one of the first Baptist preachers in Kentucky. I think I have reasonably demonstrated that that is simply not the case. I also wrote of T.T. Shields of Canada and, for another series, an essay on William Button, the printer of early British Baptists, specifically Andrew Fuller. I love writing these kinds of essays. You learn a lot of collateral history while researching their individual stories.

Recently, Jim Lutzweiler, former archivist at the Southeastern Baptist Theological Seminary, who has for years been gathering biographical essays on the contributors to The Fundamentals, asked me to write on Henry Clay Mabie. The Fundamentals were a series of nearly 100 essays and testimonies, written by more than 60 conservative contributors across the Protestant theological spectrum and published by the Bible Institute of Los Angeles between 1910–1915. They were mailed out free of charge by the hundreds of thousands to ministers around the world thanks to the benefaction of Lyman and Milton Stewart, California oil magnates. The editors of the series were Louis Meyer, Amzi Clarence Dixon and Reuben Archer Torrey. Contributors of the essays included some of the most conservative Christian leaders of their generation—B. B. Warfield, A. T. Pierson, W. H. Griffith Thomas, Torrey, Dixon and nearly sixty others. But many of the contributors, though leading figures in their generation, are little known today.

Early in the project, I wrote on George William Lasher, editor of the Baptist Journal and Messenger of Cincinnati who was a proto-fundamentalist. While The Fundamentals were published in the 1910s, fundamentalism as a distinct movement emerged in the 1920s as denominations began to fragment over theological issues. I am aware that the date of the “beginning” of fundamentalism is disputed, but by the 1920s, the term fundamentalist emerged as a moniker of identification thanks to editor Curtis Lee Laws of the Watchman-Examiner. The Fundamentals contributed to the idea of fundamentalism by identifying many of the theological points then under dispute between progressives who advocated for the new theology and old school conservatives who maintain the older orthodoxy.

Among the names associated with The Fundamentals, is Henry Clay Mabie, who had recently retired from his position of more than 18 years with the American Baptist Missionary Union (ABMU). Mabie wrote none of the essays in the series but was a constant at Northfield, MA in the summers where he had a summer home, Roeburn, a Swiss-style chalet which was a hub of Christian fellowship during his residences there, dating from the days of D.L. Moody who began summer conferences to promote Christian work. At Northfield, he rubbed elbows with many of the editors and contributors of these essays. Mabie was recommended in 1911 in a letter between editor Louis Meyer to Lyman Stewart. Since A. C. Dixon was the only Baptist on the committee that approved these essays before their publication, Meyer suggested that Mabie should be added to the group called the Committee on Fundamentals. One reason that Mabie was recommended by Meyer was that he was a Chicago man, having graduated from the old University of Chicago with his A. B. in 1868 and his D. B. (Bachelor of Divinity) in 1875. Given that the current Chicago men were “doing so much to undermine the faith of Baptists,” perhaps Mabie could help shore things up because “Dr. Mabie would command a great deal of respect among the Baptists” (Meyer to Stewart, 31 May 1911). By the following April, Mabie had read and accepted two/thirds of twenty-six essays, being commended by Meyer to Stewart (letter 12 April 1912) for his hard work.

Mabie had become connected with the ABMU in 1875 when he pastored in Oak Park, IL. He became an honorary member for life by contributing $100 to the cause of missions (an amount in today’s currency of approximately $2600), and served for a few years on its executive committee along with men like Alvah Hovey and A. J. Gordon. His pastorates included three years at First Baptist of St. Paul and nearly three more years at Central Baptist of Minneapolis. While at Central, Mabie was elected to be the corresponding secretary of the ABMU.

During his time with the ABMU, Mabie made two trips abroad, surveying the work of the mission, writing about his first trip on his return in his book In Brightest Asia in 1891. In 1907, Mabie took another international trip visiting Japan and China, speaking at the Morrison Centennial named for pioneer missionary to China Robert Morrison who landed in Macau in September 1807.

Mabie became, for the next eighteen years, a tireless spokesman for the missionary cause. In 1908, he was invited by the Rochester Theological Seminary, to teach theology for Augustus Hopkins Strong who needed a break. The board was reminded that Mabie was “an author of wide reputation, a man of prophetic spirit and insight, a speaker of inspirational power.” After his long years with the ABMU and following his year at Rochester, he continued to promote the missionary endeavor by lecturing on missions at schools and, institutions, most of them Baptist, around the country, as well as in Canada, at the behest of the Baptist Theological Faculties’ Union who raised funds to underwrite the series. His lectures at Southwestern Baptist Theological Seminary were published in 1917 as The Unshaken Kingdom.

In 1912–1913, Mabie made a final global trip, speaking at the European Baptist Congress in Stockholm, the Evangelical Conference of French Speaking Peoples in Morges, Switzerland and participating at the centennial of the American Marathi Mission in India. On his return to the United States in 1914, he delivered the annual sermon at the meeting of the Northern Baptist Convention, gathering at Tremont Temple of Boston.

Mabie continued to do the Lord’s work, travelling and speaking across the country until taken by death on 30 April 1918. Late in life he published “A Personal Manifesto” that restated his conservative views in the face of a rising tide of theological liberalism. Mabie knew all the players in the conflict. He had worked with Walter Rauschenbusch and other progressives at Rochester and had served alongside conservatives and progressives in various denominational endeavors. When I began my research, I knew that he was a missionary statesman and worthy of remembrance for his tireless work to promote the cause of global evangelism. The deeper I dug, the more it seemed likely that he was also a proto-fundamentalist. His association with men like Moody, Dixon, Torrey, and Lasher, for whose paper, the Journal and Messenger he wrote the manifesto, suggested that Mabie understood the issues and seemed to side with conservatives. The Chicago Baptist paper, The Standard, which eventually became the liberal organ of the NBC, The Baptist, noted a fracas that Mabie caused with the release in 1917 of his autobiography From Romance to Reality. He raised the issue of “doctrinal corruption” that could set in, bringing about “needed reforms within the ecclesiastical body” (247). He didn’t name the NBC specifically, but The Standard heard him loud and clear (“Dr, H. C. Mabie on the NBC” The Standard, 7 July 1917, 1–2).

Mabie was an interesting man and an important Baptist leader of a by-gone era. Perhaps he even was a kindred spirit who spoke out when he saw doctrinal error about him. There is still more to learn about Mabie. Stay tuned for further details.